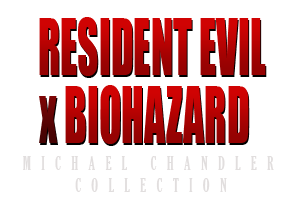 I got a few volumes in my research time in Chinese markets. They are very difficult to find and import, so I lost interest in looking for them all.

Biohazard 2 was a manhua series published by King's Foundation at an average price of HK$13. Published from February 1998 to April 1999, it spanned sixty volumes, with four or five issues released per month. It was published in Taiwan (as Chinese: 惡靈古堡2; Pinyin: Èlínggǔbǎo 2) by the CHIN WIN PUBLISHING CO. in a more condensed form, with the 60 issues being merged into 20 books. It should be noted that only the first fourteen issues followed the game's storyline; the succeeding volumes were original stories.

Biohazard 3: Last Escape is a series of Hong Kong manhua (Chinese-language comics) written as a tie-in to Resident Evil 3: Nemesis. It was published by Tinhangse Publishing Co., Ltd.